The origin of Futsal can be traced back to Montevideo, Uruguay, in 1930 when Juan Carlos Ceriani devised a five-a-side version of soccer for youth competition. The game is played on basketball-sized courts, both indoors and out without the use of sidewalls. The term FUTSAL is the international term used for the game. It is derived from the Spanish or Portuguese word for “soccer”, FUTbol or FUTebol, and the French or Spanish root word for “indoor” or “room”, SALon or Salle or SALa. Taken literally, Futbol means ‘foot and ball‘(i.e. playing outdoors) and Futsal indicates ‘Futbol in the room‘ (i.e. playing indoors). 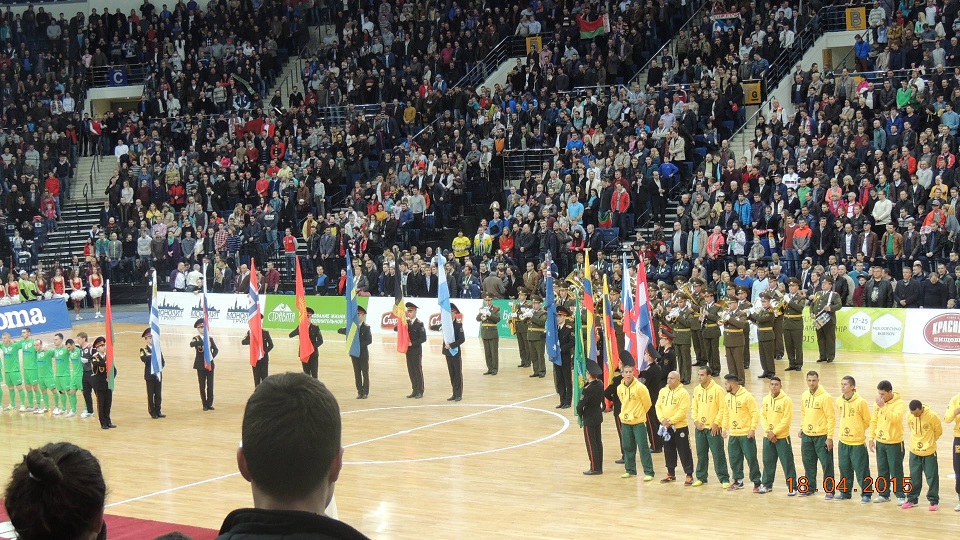 Futsal is FIFA’s AND AMF official indoor soccer game which is, essentially, a scaled-down version of outdoor soccer played indoors. It is a small-sided game (5v5) played on a smaller field (roughly basketball court sized) with a smaller (size 3-4) ball. Futsal is played with touchline boundaries. There are no walls in play. This is the game that outdoor soccer players around the globe play when they are indoors to refine and maintain their control skills and touch. It is superior to walled soccer in terms of developing better skills and technique. In traditional Australian walled soccer, players regularly whack the ball (and sometimes their bodies) against the boards which promote improper technique and too often reward errant play. In Futsal, players are constantly reminded to play the same quality control game that is required for success in the outdoor game.

The game is frequently referred to as Five-A-Side. Once the ball got rolling, Futsal gained rapid popularity throughout South America, particularly in Brazil. The skill developed in this game is visible in the world-famous style the Brazilians display outdoors on the full-sized field. Pele, Zico, Socrates, Bebeto and other Brazilian superstars developed their skill playing Futsal. While Brazil continues to be the Futsal hub of the world, the game is now played, under the auspices of AMF all over the world, from Europe to North and Central America and the Caribbean, South America, Africa, and Asia and Oceania.

The first international competition took place in 1965 when Paraguay won the first South American Cup. Six more South American Cups were held through 1979, with Brazil winning all of them. Brazil continued its dominance with a victory in the first Pan American Cup in 1980 and won it again the next time it was played in 1984.

Why Futsal?
Futsal is the only indoor game sanctioned by FIFA and IFA. If skills development is important, Futsal is recognized as clearly the best form of indoor soccer. But that’s not the only reason.

And HFSS offers Futsal competitions. So, there are many reasons to consider Futsal. If you want a better indoor game which is safer and always improving your skills then read on.

Who says Futsal is really that much better?
IFA says Futsal is better. MYSA says Futsal is better. And the Brazilians are among the many nations that swear by it. Pele, Ronaldo and Ronaldinho all credit Futsal for much of their skill and technique development. All the major heads of FFA (Football Federation Australia) and FIFA declared that this is the way to go. even though they don’t have a Futsal program to match AFA . Once you experience Futsal, you will see the reasons.

Is Futsal new?
Futsal is the new rage in Australian Football. However, as is often the case, Australia is just catching on to what the world already knows. Superior football skill is built by simulating the outdoor game indoors with small-sided games and a smaller ball. World-famous clubs such as Ajax have used this approach for years. Futsal has been around for seventy-five years but our interest in football skill development has only recently focused attention on the training techniques used in successful football powerhouses such as Brazil, Holland, Germany, France, and Italy. So, Futsal has been around for many years but interest is just starting to explode in Australia

How does Futsal promote better technique?
Just watch Futsal players fight to keep the ball from crossing the touchline and you’ll immediately begin to see how Futsal develops skill, control, and technique. A small field with lines puts players constantly under pressure from other players and out-of-play boundaries. Players must learn to settle the ball rapidly, chop sharply, shield effectively, pass quickly and move into space.

With Futsal, the emphasis is clearly on control and technique. Without control and technique, you cannot expect to succeed in Futsal. And, if Australian players are to be more successful in the international arena, it is clear that we must better train and prepare our youth on proper technique. Playing indoor wall soccer just does not make sense to any serious development program. If you are serious about skills and technique development, Futsal is the superior activity. Futsal promotes better technique and develops skills more rapidly. And if you are serious about the quality of the time you spend playing or watching soccer games, Futsal is clearly better.

As a Futsal defender, you can ‘face up’ on an oncoming player just like in outdoor soccer (there is no wall pass to beat you). You can let errant passes go out of bounds to win the ball (the proper result of your opponent’s faux-pas).

Goalies and defenders can concentrate on proper shot blocking angles. You do not need to worry about long overhead balls which should go out of bounds. You can drive an oncoming player into the side to break up break-away or outnumbered breaks. In general, you can practice and perfect the defensive techniques which apply to outdoor soccer. You don’t waste time working on defending against phantom players (i.e. walls).

Consider some of the key problems with the following typical style Indoor soccer scenarios:

It should be apparent that there are serious problems with the above scenarios in terms of developing proper technique for the ‘real’ game of outdoor soccer:

Futsal places a premium on control and technique. Take away the walls and you can still have as much fun as walled soccer. But there are far more quality touches and repetitions which directly translate to the outdoor game. With Futsal, you make better use of your time and money.

Is Futsal as much fun as walled soccer?
Absolutely. If you like outdoor soccer, you’ll love Futsal. It is fast-paced and exciting. With the field being so small, scoring chances abound and games are often high scoring affairs with many different players scoring goals. Even though the ball may go out of bounds, the ball must be put back in play within four seconds or the opposing team gets possession. This not only encourages better control but it also keeps players moving. You cannot sit back and wait for the ball to rebound off the boards (as in walled soccer) because you must fetch it promptly and kick it back into play within four seconds.

It is interesting and important to note that, unlike outdoor soccer, THERE ARE WALLS IN MOST FUTSAL CENTERS! The walls are typically three to ten feet from the boundary lines. Therefore errant balls rebound quickly back to players who subsequently put the ball back into play within four seconds. So, you experience the speed and continuous play of ‘walled soccer’ along with the benefits of small-sided skills-oriented gaming.

From a developmental standpoint, you satisfy the magic objective of teaching proper technique while having fun. This is, perhaps, the most wonderful achievement of Futsal.

How is Futsal safer?
Eliminating walls makes soccer safer but there are other aspects of Futsal which make it safer as well. Besides fewer broken bones and concussions (which too often occur in hockey-rink walled soccer), there are fewer high-speed collisions because the field is shorter. You don’t develop the same full head of steam running for the ball in Futsal and consequently have less of those related injuries. Finally, a game which emphasizes control under pressure versus kick and runs inevitably leads to more heads-up play. In general, it is safer by virtue of the fewer injuries due to the nature of the arena and the game.

Is this just an oddball fad?
No. This is the way the world develops great players year-round. None of the successful major playing countries in the world including, Brazil, Italy, Germany, France, Holland, and Spain plays indoor soccer in hockey rinks. Now that America is taking soccer seriously and wants to compete at the highest levels, Futsal is dominating the US indoor soccer scene. By playing Futsal, you will be joining the fastest growing indoor league. American has joined Taipei, New Zealand and Australia in a biannual Futsal competition called the Pacific Cup. Australian Futsal Association realises that development will only advance to the next level when our game advances to the same level as the rest of the world. Thus the many pathways offered by AFA for Futsal players in Australia. Before entering another ‘hockey rink’ style league or going to an outdoor Sixes Programme, ask yourself “How important is skills development to my players?” This is the question coaches are asking and the conclusion people seem to be drawing is that Futsal is the wave of the future. It is not a fad, it is the way the world plays and it is here to stay in Australia.

Why the funny ball?
Unlike some myths, a Futsal ball is neither funny nor fuzzy. It is, however, different.
The Futsal ball, also known as a reduced bound or low-bounce ball, is smaller than a normal outdoor soccer ball and heavier. There is an AMF specification for the ball’s size, weight and bounce.

These properties are specifically designed to build confidence and develop skill and technique. When a Futsal ball is received, it virtually ‘sticks’ to the foot. This builds great confidence in tight spaces when rapid passes are being issued repeatedly. Interestingly, that same property which makes the ball easy to receive makes it more difficult to strike. A Futsal ball gradually eliminates the ‘lazy pass’. It is heavier and players rapidly get acquainted with the merits of bending the knee, turning the hips, and striking the ball firmly to propel it. Repeated touches on the ball eventually produce a motion which, when transplanted outdoors with a high bounce ball, translates into a firmer and proportionately longer pass appropriate for the big field.

Many programs around the world also claim that smaller size encourages more precise striking of the ‘sweet spot’ of the ball. If one works during the offseason on striking a Futsal ball, then a larger bouncier ball is struck with greater confidence and authority in the outdoor game.